There were few talking points in a poor goalless first half, where both sides rushed their passes and failed to control both the ball and the game. The first real talking point of the game came midway through the half when a Silsden defender cleared the ball into the main stand hitting a supporter who required treatment from the club physio.

Silsden came close to breaking the deadlock on thirty-five minutes, when a corner was headed out to the edge of the area by the Padiham defence. Where the ball fell to Luke Rhodes whose half volley was cleared off the line leaving the half-time score 0-0.

The visitors joint management team Adam Morning & Michael Morrison must have given a highly motivating team talk, as Padiham came out for the second half a much improved side creating a number of chances on goal following some great moves down the left.

On sixty-five minutes, manager Danny Forrest introduced striker Christopher Wademan who changed the game with some excellent forward run, on seventy seven minutes he got to the ball before visiting goalkeeper Bunting-Jones to tap the ball home from six yards.

The last ten minutes of the game provided the must entertainment as the home side played some excellent football due to the space created by Wademan, with just two minutes to go in the game Wademan added Silsden’s and his second from the penalty spot to make the game safe. 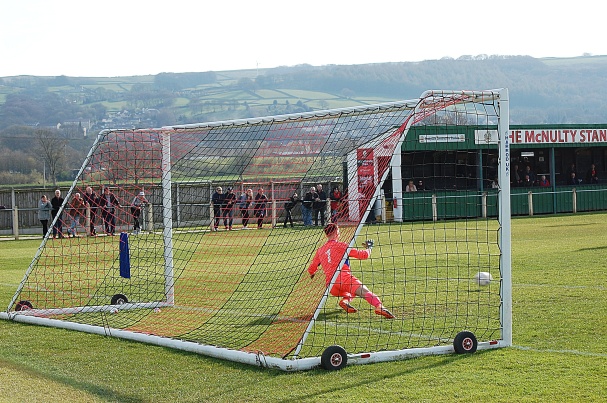 Silsden’s Josh Kaine added a third goal in the final minute after he beat goalkeeper Bunting-Jones to a header before tapping the ball over the line. However referee Gareth Thomas disallowed the goal for a foul on the goalkeeper, making the full-time score 2-0.

Speaking after the match player manager Danny Forrest said, “Looking back at the game I felt we did enough to earn the three points.  I felt our attitude got us through, we just kept going and going and deservedly got our rewards. I felt we dominated the ball without quite being at our best but all in all I felt we did enough.

Defensively, we were decent again and that is now two clean sheets on the bounce which is always pleasing. Going forward we stuck at it and with the talent we have we knew chances would come along at some point. I was really happy for Chris Wademan who came off the bench to score two goals. It’s been a tough season for him personally with the serious knee injury.  I know the quality he possesses and with work he can finish the season strongly.”