After travelling to the south coast last weekend only to find out that their fixture with Torquay united had been postponed, Sean St Ledger and his squad welcomed former Football League side Leyton Orient to Nethermoor Park for their first every visit to the Yorkshire club.

Despite the fact that both sides created chances in the first-half it was Leyton Orient that always looked the stronger of the two sides, it was the visitors that had the first effort on goal as Craig Clay sent a volley fly just wide of Luke Coddington’s post.

The visitors second effort came after fourteen minutes as Macauley Bonne shot from the edge of the six yard box was well saved by Luke Coddington who pushed the ball around the post for a corner to the visitors.

On fifteen minutes, the home side then had a chance to take the lead with a free-kick from Kevan Hurst, which went just wide of Brill’s right-hand post for a goal kick.

Rowan Liburd then had a chance for the home side following an excellent cross to the back post by Alex Purver, however the striker tried to hard to get above the defender and as Liburd fell over the back of the defender his header went wide of the post.

In the final five minutes, the ball broke loose near the Orient box and Alex Purver controlled the ball before taking an excellent shot which was well saved by Brill in the Leyton Orient goal to make the half-time score 0-0.

Just two minutes into the second-half and Luke Coddington received a straight red card after racing from his goal out of his area to bring down Macauley Bonne at the edge of his box, following an excellent ball over the top of the Guiseley defence.

Leyton Orient captain, Jobi McAnuff punished the lions straight away as he curled the resulting free-kick past substitute goalkeeper Joe Green on forty-eight minutes to make it 1-0 to the visitors.

On seventy-five minutes, Leyton Orient extended their lead when Jobi McAnuff fired a low drive past replacement goalkeeper Joe Green to give the visitors a two-goal cushion.

Guiseley got themselves back into the game straight away as captain Kayode Odejayi chased Orient right-back Widdowson, who played the ball back to Brill in the Leyton Orient goal, but the ball rolled under his foot and into the empty goal to make it 1-2.

In the fourth minute of injury time the visitors added a third goal, when substitute Dave Mooney slotted the ball passed Green to make the final score 1-3. 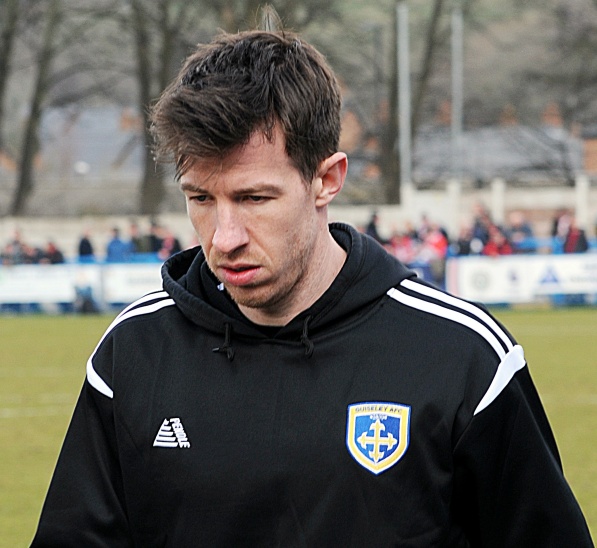 Speaking after the game manager Sean St Ledger said, “We were poor today from the start to the finish, Leyton Orient had enough chances in the first half to win the game and we had a big slice of luck to come in at half-time 0-0.

We went down to ten men again which means its back against the wall and Orient made us pay.  We travel to Hartlepool United on Easter Monday for a must win game, it will be a difficult but we will keep fighting until the end of season and see where that take us.”