Former Clarets midfielder Chris McCann has today signed for D.C. United in the MSL and will link up with former England International captain Wayne Rooney at the District. The veteran midfielder who last season won the MSL Champions Cup with Atlanta United has joined up with the squad for the second pre-season training camp at Clearwater. 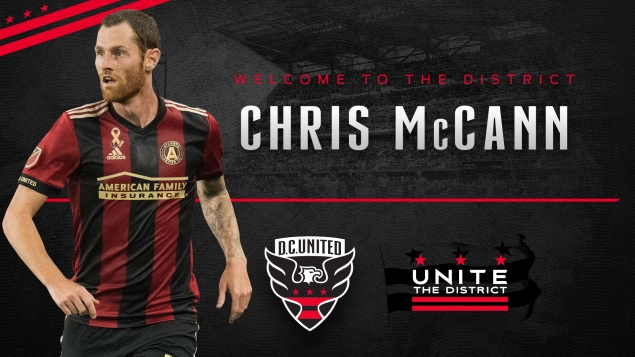 McCann started his professional career with Burnley Football Club after coming through the youth academy, before signing a professional contract with the club in July 2005. He made his first team debut in the 2005–06 season, coming on as a substitute in a 4–0 win against Coventry City on the 13th August 2005.  He went on to make 286 appearances, scoring 30 goals for the Clarets in the English Football League (EFL).

He then joined Wigan Athletic on the 1st July 2013 on a free transfer after his contract had expired at Turf Moor.  McCann spent three seasons with Wigan Athletic scoring 8 goals in 97 appearances for the club before moving to the MSL signing for Atlanta United. Just one month after arriving in the USA he joined Coventry City until the start of the MSL season and made 13 appearances for the Sky Blues scoring 1 goal.

The Irishman joined Atlanta United in their inaugural season and went on to make 45 MLS appearances for the Five Stripes, scoring 1 goal in a 2-2 draw against New York City last April. Internationally, McCann has represented the Republic of Ireland at U17, U18, U19 and U21 levels.

Speaking about the signing Dave Kasper (DC United General Manager) said, “We are excited to acquire Chris and add real quality, versatility and experience to our group, he has played with Coventry City, Wigan athletic and Burnley in the top tiers of English football and he won an MLS Cup with Atlanta last year. We look forward to having him at the club.”