Following a difficult start to the season with home games against Chelsea and Manchester United the Clarets welcomed Sunderland to Turf Moor with both sides still looking for their first win of the season.

Burnley had the first attempt on goal after only two minutes following an excellent pass from Scott Arfield which found Kieran Trippier at the edge of the Sunderland area, but his right footed shot was well saved by Vito Mannone.

Just two minutes later, George Boyd hit a right footed shot from the centre of the penalty area which was blocked by Wes Brown and then cleared by Van Aanholt.

Then on ten minutes, Lukas Jutkiewicz had a left foot shot which was arrowing towards the top left-hand corner of the goal, but his goal bound effort was tipped over the crossbar by Mannone.

Burnley should have taken the lead on nineteen minutes, following an excellent run by George Boyd down the right-wing, Boyd then cut the ball across the edge of the penalty area from David Jones, but his left foot shot from inside the area was again well saved by Vito Mannone.

Sunderland then had two efforts on goal, the first fell to England international Jack Rodwell on twenty three minutes, but his close range header was saved well saved by Tom Heaton.

Lukas Jutkiewicz then went close on thirty-eight minutes with a right footed shot from outside the box, which was well saved by Vito Mannone to leave the half time score 0-0.

The second half started with Sunderland having the first attempt on goal after fifty minutes, when Adam Johnson had a shot from the left hand side of the penalty area following an excellent run and pass from Seb Larsson, but Johnson’s shot went just wide of the right hand post.

Two minutes later an excellent left footed shot from just outside the area by England international Jack Rodwell was well saved by Tom Heaton in the Burnley goal.

Sunderland should have taken the lead on the hour mark when Jack Rodwell’s header from six yards was well saved by Tom Heaton, following an excellent headed pass from John O’Shea.

On sixty-eight minutes, Scott Arfield played an excellent one-two with Lukas Jutkiewicz before hitting a left-foot shot from the edge of the area, which was well saved by Mannone who tipped the shot around the post for a corner.

From the resulting David Jones corner, Scott Arfield hit another outstanding left-foot shot from the edge of the area, but this time his shot went high and wide of the goal. 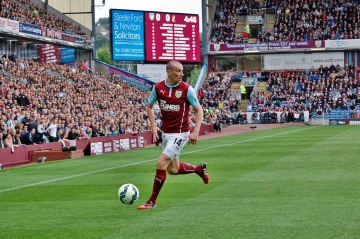 Lukas Jutkiewicz should have put the Clarets in front on eighty minutes following an excellent ball from Ashley Barnes, but unmarked inside the area the striker managed to screw his shot wide of the right hand post.

Ashley Barnes then went close for the Clarets as his shot from the left-hand side of the penalty area hit a defender and looped over Mannone in the Sunderland goal before hitting the crossbar and bouncing clear.

Sunderland could have then won the game in the first minute of five added minutes, when Dean Marney brought down Adam Johnson thirty yards from his own goal.  Patrick van Aanholt hit the resulting free-kick which was tipped onto the post by Tom Heaton, only for the ball to bounce back off the post and hit Heaton on the back before going out for a corner.

From the resulting corner, Patrick van Aanholt again hit another 30 yard shot from outside the area, but this time it went high and wide of the Burnley goal and the game finished 0-0.

Speaking after the match manager Sean Dyche said, “The fans were excellent again today and I hope they enjoyed what they saw on the pitch, which was a team organised with energy and providing the ammunition to score goals.

I think they will be scratching their heads and wondering when one is going to drop in for us, however one will come shortly, we are going about our business exactly how I planned it as a manager, which is in the right fashion that is appropriate for the team, myself and the fans.

The players are delivering and there were more positive signs today, it’s very, very close and it’s our job now to make it happen.  I was very pleased with the clean sheet again, it’s so hard to do that back-to-back, but as I said the framework and energy is spot on and we  played good football.

The balance of the side was even better today defensively the framework of the side was good and we created enough chances to win the game.  It didn’t happen, but I thought overall we deserved more than we got and if we keep playing like that I am absolutely convinced that wins are around the corner.

Lukas Jutkiewicz, who scored six goals in pre-season put in a man-of-the-match display to lead the Clarets line alongside Marvin Sordell.  I think Lukas was absolutely tremendous today, I was a centre half and I wouldn’t have enjoyed playing against him today”.