Evo-Stik Premier League club Chesham United the lowest ranked team still left in the FA Cup arrived at the Coral Windows Stadium looking to create another Cup shock after beating Bristol Rovers in the last round. 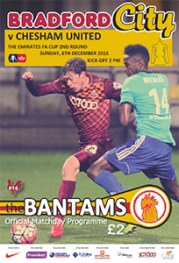 There was only ever going to be one winner in this game, as City controlled large parts of the match and had twenty shots on the Chesham goal.

Bradford’s first shot of the game came two minutes into the game when Billy Knott hit a lift-foot shot from outside the area that went just wide of the Chesham left-hand post.

Tony McMahon was next in line to have a shot at the Chesham goal, but his right-footed shot from the edge of the box was blocked by Curtis Ujah.

Chesham United could have taken the on fourteen minutes when Sam Youngs left-footed shot from the middle of the penalty area, but his shot went high over Ben Williams crossbar.

Bradford City took the lead on twenty-two minutes as Kyel Reid collected the ball, before cutting across the pitch to the edge of the penalty area and hitting a right-footed shot into the bottom right corner to make it 1-0.

City continue to press and had eight further chances in the next twenty minutes, Kyel Reid, Billy Knott, Billy Clarke all had efforts at goal, but James Hanson had three chances before extending the lead.

On forty-two minutes an excellent cross field sixty yards pass from Lee Evans was well taken down by James Hanson, who struck a shot across the six yard box passed the Chesham keeper to make the half-time score 2-0. 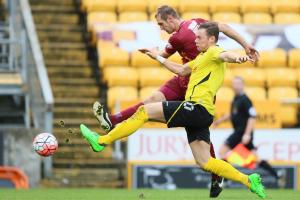 The second half was much the same as the first half with Bradford City on top for the first fifteen minutes, James Hanson had another effort which was well saved.

Chesham then had their best spell and for the next twenty-five minutes they were on top, the visitors did create a few chances from Sam Youngs, Ashley Smith and David Pearce.

On eighty six minutes, Chesham should have pulled a goal but Ryan Blake’s right footed shot from the centre of the box was well saved by Ben Williams. 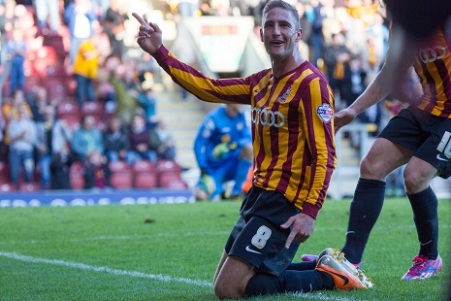 Gary Liddle scored the third goal on ninety minutes, when his right footed shot from the edge of the six yard box went into the top left-hand corner of the goal, following a Tony McMahon corner.

One minute after the third goal, City added a fourth goal when Devante Cole tapped the ball home from close range after a Tony McMahon cross to make the full-time score 4-0.

Speaking after the match Bradford manager Phil Parkinson said, “We knew this game was going to be a difficult one because we were aware of how much Chesham had been looking forward to this tie.

This game was massively important for us as well though and I thought we did the job well.  We played some great football in the first half and scored two very well taken goals.

We were a bit untidy in our play at times in the second period but the back four stood strong and we saw the job through, which was very important.

I’m pleased for Kyel Reid, he has two great feet and he has struck the goal well.  Evo’s (Lee Evans) pass for James Hanson’s goal was top class and James finished it well on his weaker foot.

It was a great run from Gary Liddle for his goal at the end. He was unlucky not to be starting today, but I just felt Evans and Billy Knott were the right two for us in midfield for the game.

Devante is obviously frustrated not to be starting, you want players to be disappointed when they are not in the team, but he’s got his goal and it will do him good.”