Guiseley AFC arrived at the Shay to take on West Yorkshire rivals FC Halifax Town in the live BT Sport lunchtime kick-off in the Vanarama National League.  Alex Lockwood made one change from the side that beat Torquay United last week with Kevan Hurst replacing Will Hatfield who dropped to the bench. 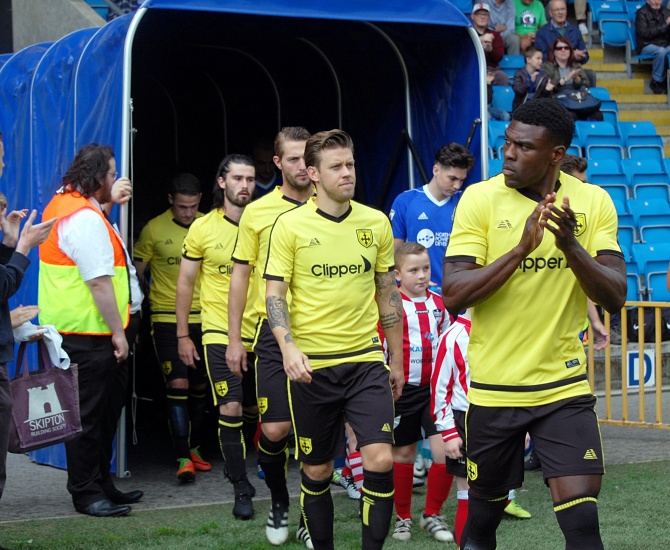 Despite FC Halifax having control of the game it was the visitors who created the first real chance, as Reece Thompson managed to get in behind the FC Halifax defence only for McManus produced a phenomenal tackle in the area, before Alex Purver saw his effort from outside the box deflect over the crossbar.

McManus then proved effective at the other end as his low shot was deflected inches wide of the Guiseley post with visiting keeper Joe Green well beaten. The Young keeper was in action again moments later, as he rushed from his goal to save at the feet of Adam Morgan, however the home supporters claimed for a penalty as they believed he hauled down Morgan, but the referee Thomas Bramall waved play on. 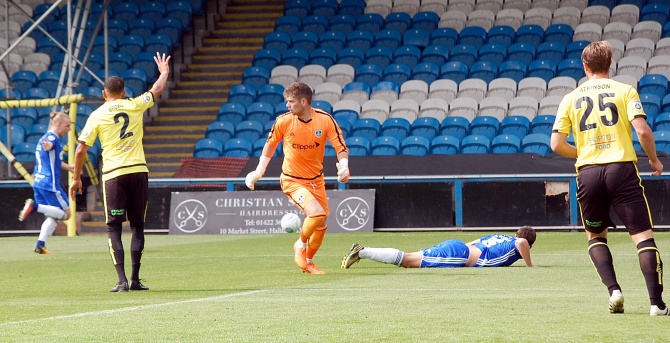 The home side took the lead on twenty-five minutes, when Matty Kosylo collected the ball on the left-hand side.  The lively winger easily beat full-back Connor Brown before he went across the edge of the box passed another four defenders, before unleashing an unstoppable shot past Green to make the score 1-0.

FC Halifax Town were now on top and creating a number of chances, at the heart of it was the strike partnership of Tom Denton and Adam Morgan, as the tall striker set up the former Liverpool striker with a hat-trick of opportunities which he failed to convert.

FC Halifax continue to put pressure on the visitors and should have extended their lead when a Tom Denton flick-on allowed Morgan a one on one chance against Joe Green but the keeper did well to block at his near post.

Denton then played an exquisite pass to Josh Macdonald and his low cross found Kosylo who in turn found Morgan, however Morgan struck the ball into the empty North Stand making the half-time score 1-0 to FC Halifax Town. 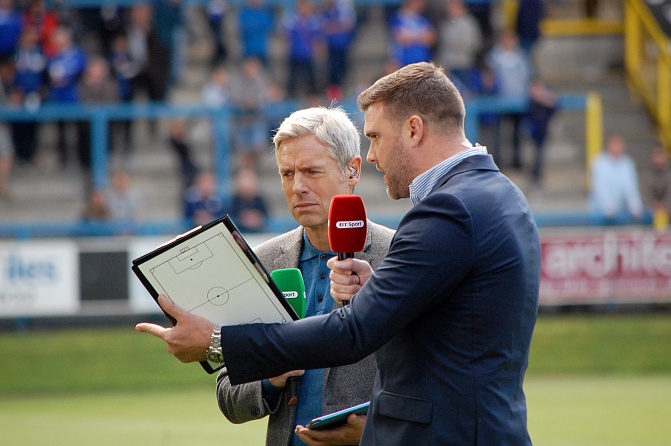 Adam Lockwood must have given the visitors a few harsh words during the half-time team talk as the visitors dominated the second half but they failed to test Sam Johnson. John Rooney was arguably the best and most dangerous player for Guiseley as he ran the midfield and linked well with Kevan Hurst and Alex Purver.

On the hour mark, Connor Brown had two attempts on the visitors goal, the first came from a corner and he got around the back of the home defence but his header went into the side netting.  His second effort was after he had collected the ball on the right wing and cut inside to the edge of the area and hitting a great effort which was well saved by Johnson in goal. 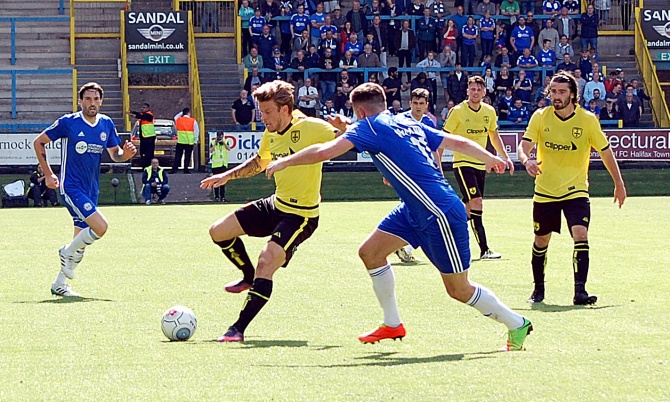 FC Halifax extended their lead on seventy-eight minutes, when Matty Brown scored his first ever goal for the Shaymen, thumping a header past the helpless Joe Green from a Connor Oliver corner to make the score 2-0 to Halifax. 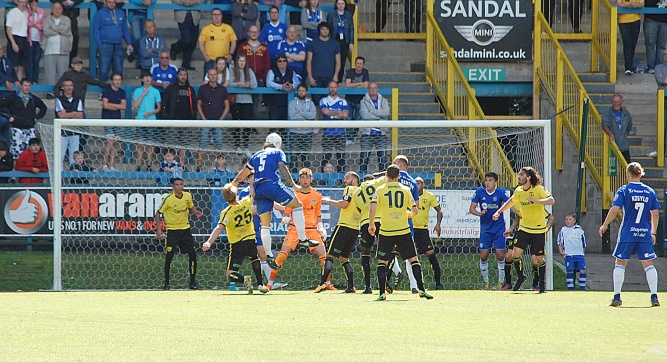 In the last ten minutes, the visitors had some success as they started to put pressure on the home sides defence.  Kevan Hurst, Alex Purver and Frank Mulhern all had strikes at goal, but they failed to trouble Sam Johnson and the match ended 2-0 to the home side.

Speaking after the match Guiseley manager Adam Lockwood said, “At times I thought we were bright but there was no real cutting edge.  I have asked for people to stand up now and be counted, it’s good being on the ball, but we have to be ruthless in games at both ends that’s where we have lost the game.”

Billy Heath was clearly delighted with his team’s performance at the final whistle, whilst Adam Lockwood will now have a big job on his hands to lift his squad for two very tough matches against former League Two opponents in Hartlepool United and Leyton Orient.